Trolling online, like most things, probably started as a joke, a bit of fun which has slowly but surely escalated into the extremes. From the controversial, to the critical, to the horrendously offensive, trolls’ comments online can spark arguments and damage targets’ self-esteem, confidence and mental health: trolls entertaining themselves at the expense of others. Mental health is such a prevalent topic nowadays, yet when it comes to cyberbullying and online harassment from trolls, the conversation just doesn’t seem to be there – even though the statistics are so shocking. So why aren’t we talking about trolling more?

In the light of Halloween, we want to explore this topic more, because there’s nothing scarier than the reality we’re facing. What really goes on in the mind of online trolls; why do they torment and harass others? What can we do to prevent such behaviour? Read on to find out our thoughts.

We live in an age where we’re living two lives: in reality and online. The rise of social media means that people have the freedom to post their whole lives online for everyone to see and judge. This increased accessibility and ability to connect with people the world over means that your life, thoughts and whole self are visible for the whole world to comment on, judge, criticise and make fun of.

This paves the way for internet trolls: bullies now have the opportunity to hide behind the security of online anonymity whilst throwing around mean comments and jokes, whether this be towards a celebrity, social group or individual. Trolling has been defined to encompass unsolicited and/or controversial comments intended to provoke, upset or argue with readers. A recent study found that online bullying has grown by 88 per cent in just five years, with thousands of children and teenagers being targeted, however, no one is exempt from being the victim of trolling. Trolling predominantly manifests in people being made fun of and criticised for the sake of starting an argument to entertain themselves at the expense of others. I’m sure we’ve all seen examples of such behaviour, particularly in comments sections on social media. In some extreme situations, however, it has been reported that trolls have spread anti-Semitic messages, rape and death threats and encouragements to people to kill themselves.

There is obviously some deep-rooted problem within these people which needs addressing. Just why do they do it?

The largest reported reason surrounding why people troll is due to the anonymity of the internet: put simply, they can get away with it more so than real life. Research has also quoted “temporary identity loss”; explaining that trolling may bring out the worst side in us, by lifting the moral constraints and social etiquette that regulate our behaviour in normal situations, fuelling abrasive reactions. Essentially, the internet and the online world is distant from reality so it seems like there are fewer consequences of online bullying compared with bullying in the physical world; this is obviously not the case. 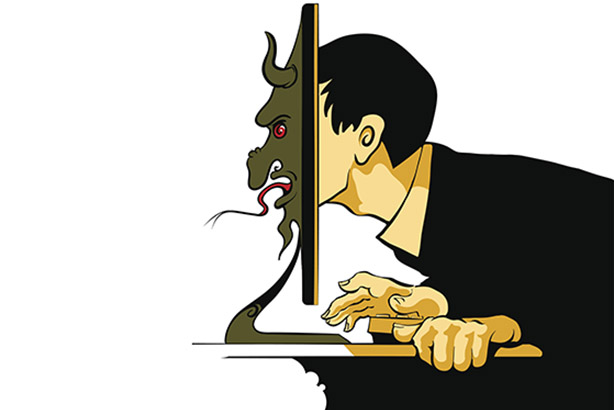 Could it be that trolling is a status-enhancing activity: people looking to gain the greatest number of likes, laughs and shares to signal online popularity? This reminds me of Monica Lewinsky’s TED talk that I watched recently in which she explains how we are in a culture of breaking each other down and profiting from others’ embarrassment. I couldn’t agree with her more. Bullies benefit from, and are entertained at, the expense of others. In this online society, the more outrageous to posts, the more clicks, likes and follows, and the more money which is generated. It’s disgusting and harmful cycle we must break from.

This desensitisation to the impact of such behaviours is not just facing individuals, but society as a whole. And this is where the danger lies, because bullies don’t consider the possibly disastrous impact their words and actions online can have on people’s self-esteem, confidence and mental health.

Lewinsky herself discusses how, during the scandal with Bill Clinton, the comments regarding herself online drove her family to worry that she would take her own life. According to Mind, 1 in 4 people experience mental health problems every year, and a recent rise in hospital admissions of teenagers for suicidal thoughts and attempted suicides has been reportedly linked to an increase in cyberbullying. In order to tackle the issue of trolls, we need to look not only at the individuals, but work towards changing society’s attitudes, values and inner-workings to truly generate change.

A quick Google search brings up hundreds of articles in which the advice “Don’t feed the trolls” is presented, encouraging that the best way to deal with trolls is ignore them – they thrive off the attention. But I think it’s time we see this issue as it really is: abusive behaviour which can have devastating results. It’s an issue which needs tackling. Whilst the internet is constantly expanding and evolving, faster than we can possibly monitor, we must take action. Taken to the extreme, trolling targets different ethnic, religious, racial groups. Some have encompassed such talk within hate speech, with Director of Public Prosecutions Alison Saunders at the Crown Prosecution Service commenting: “Social media can be used to educate, entertain and enlighten, but there are also people who use it to bully, intimidate and harass. Ignorance is not a defence and perceived anonymity is not an escape. Those who commit these acts, or encourage others to do the same, can and will be prosecuted.”

Is this a little extreme? Some may say that cracking down on trolls even through online reporting and blocking profiles and content is a threat to freedom of speech, but there’s got to be a line drawn when your speech is created deliberately to make fun of others, be aggressive, critical, harmful and bully others without being provoked.

The phrase “If you don’t have anything nice to say, don’t say it” comes to mind.

We are reminded every day of the real-life impact of online bullying. This is a topic we need to stop tiptoeing around. It is no longer any good or acceptable to pretend that this is not an issue, now is the time to take charge and take appropriate action. It’s time we took responsibility for ours and others’ actions. Call it out when you see it. Report aggressive, offensive accounts. Don’t just stand on the side-lines. It will make a difference.